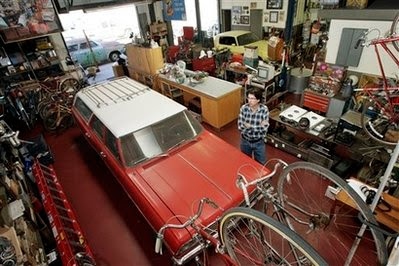 Things have been busy around the shop recently!

American Maker
Will you be in Chicago on September 20? I will be hosting the American Maker event at the Museum of Science and Industry! Have you built something outrageous, inspired, clever or insulting? Come and compete for 500 bucks and a spot in Make Magazine. Or, just come by and say hello!

Associated Press Article
John and Reed came by the shop recently and wrote a great article. I am always pleased when the story goes beyond the "Ain't that quirky?!" aspect.

Michael Feldman's Whad'Ya Know?
Last Friday, a producer called and asked if I wanted to be on Whad'Ya Know? live on Saturday morning. Now, I don't need to tell D+R readers that I am generally out and hitting the garage sales by 7AM on any Saturday. Do not be concerned! I was still able to get out after the show and pick up a pair of Urei 811c studio monitors, a Motobecane mixte and a hulking Denon amplifier with two discreet channels of awesomeness.

Make: Television
Coming to PBS in January, the very exciting debut of the Make: television show. The producers are sterling gents who completely get the magic of these personal objects we build. The crew came to Hooptyrides for a grueling 13 hour day which will be whittled down to 6-8 minutes of me explaining why making is so important. That was a long day.

Boingboing
They have resuscitated guest blogging over at boingboing and I am currently serving a two week stint.
Posted by Mister Jalopy at 7:18 PM
Email ThisBlogThis!Share to TwitterShare to FacebookShare to Pinterest
Newer Post Older Post Home