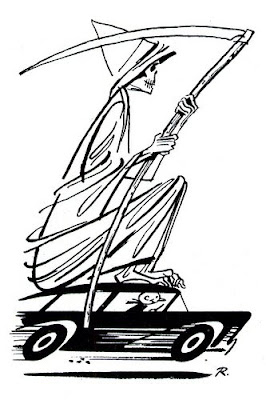 This week Leif Peng of Today's Inspiration has been covering all-but-forgotten cartoonists whose stock in trade was spot illustrations for magazines in the mid-20th century. Today, he has several examples of wonderfully expressive and wry illustrations from an artist only known as "Ressler."

I have never seen any other artwork in any other publication with that signature, and The Post never had Ressler work on any other features (as far as I know). An internet search proved fruitless, and Ressler is not listed in any volumes I own collecting information on illustrators or cartoonists. Ressler's semi-cartoony style holds a lot of appeal for me. He was no slouch with pen and ink. His work reveals a good sense of observation... and a sharp wit.