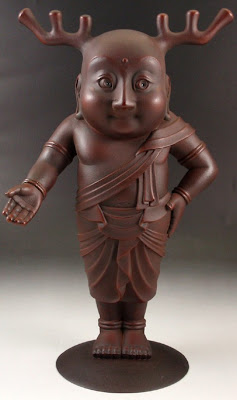 From Pink Tentacle: "Sculptor Satoshi Yabuuchi is auctioning a limited-edition bronze statue of Sento-kun, the popular but controversial official mascot he designed for the Commemorative Events of the 1,300th Anniversary of the Nara-Heijokyo Capital (the upcoming festival marking 1,300 years since Nara’s establishment as Japan’s capital in 710 AD). The current bid on this 30.5-cm tall sculpture — one of only 130 created — is 185,000 yen ($1,750)."
Posted by Frauenfelder at 8:18 AM
Email ThisBlogThis!Share to TwitterShare to FacebookShare to Pinterest
Newer Post Older Post Home