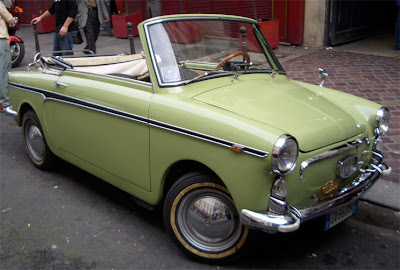 Hey Mr. Jalopy! I was kicking around one of the seedier parts of Paris today (Strasbourg Saint-Denis) when I came across this petite bagnole that was getting attention from other passersby as well. Even though the white-walls look like they're improvised with masking tape, this car was spotless inside and out. The front grill said "Autobianchini " so I'm guessing it's Italian. But, I thought I'd ask Monsieur Jalopy himself about this nifty little ride.

Mister Jalopy - From time to time, we share posts at D+R to leverage the considerable knowledge of our collective minds. For example, when I found the Martin uke at a garage sale, co-conspirator Mark became so frustrated with my lack of research diligence that I posted a bunch of photos and turned it over to him.

I had to Google bagnole as I thought Jenny was referring to this little cutie metaphorically. I assumed bagnole was a small bread product that was probably slightly sweet, but not a desert. Au contraire (that's French!) Bagnole is "a small useless car." Like a jalopy! Should there ever be an opportunity to address a group of French nationals, I will introduce myself as Monsieur Bagnole and watch the hilarity ensue.

Now, about this car, I don't know! Well, I sorta know as it is another European micro car built for insanely narrow European streets. Like the Mini and Fiat 500, these diminutive vehicles were one step up from a Vespa in price, interior space and performance. These are the hapless suckers that toot their too-high-pitched horn right before spinning out when James Bond's Aston Martin blasts through the traffic circle - displacing pigeons, croissants (that's French!) and existentialists from sidewalk cafes.