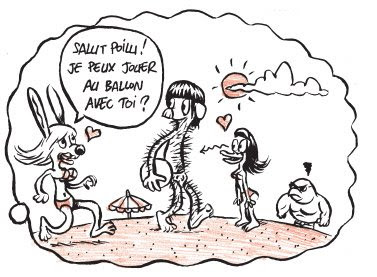 The French take comics very seriously. While I was in Paris I picked up some recently released graphic novels by artists I was unfamiliar with. Fred Niedhardt's book Pattes D'eph & Col Roulé (Bell Bottoms and Turtle Neck) is a touching journal of his life in Besançon as an adolescent in the late 70's. His drawings are deceptively loose (above), but the stories are dark and touching, along with revealing a fascinating mix of French and US pop culture nostalgia all blended together.

The second book that I could not put down is La Vie Secrète des Jeunes (The Secret Life of Youths) by Riad Sattouf, a weekly strip published in one of Paris' weekly political satire sheets: Charlie Hebdo (an extreme leftist publication brought to trial in France for re-publishing the infamous satirical images of the prophet Muhammed). Each strip is a voyeuristic episode witnessed on the streets of Paris, and recounted by Sattouf in comic form. Visual heroin. And, a great lexicon of street slang!