D+R Architecture Roundtable "What do materials want to be?"

Honest materials for our age. He uses them honestly - his steel does what steel does, and he shows it doing it.

And I thought about that for a day or two. I thought it was a succinct point about honesty, integrity and authenticity. D+R pal Steve Hegedus liked the post and offered some additional thoughts.

Steve's thoughts arrived in email, but I found them fascinating enough to post here, in our dictatorial salon:

Another quote in tandem with Mies' thinking is by Louis Kahn:

The point of the mock conversation is the intention of expressing what the brick wants to do, to take advantage of its natural capability and character with honor for the material without short changing it's beauty.

In opposition, there is quote by Robert Venturi, "Less is a bore." This is a response to modernism's tendency to the overly simplistic. In other words, unity and clarity should be over ridden in favor of contradiction and complexity. It is said that one of the failures of modernism is a lack of humanism, vitality and improvisation while denying history and context. Venturi's quote therefore is a statement meant to humanize and casualize modernism.

I often ask my students to think of what the brick doesn't want to be. It's a position asking to exploit what is inherent but not obvious, asking how the brick can transcend being a brick into something new and unusual. This opens up unforeseen opportunities as designers. For example, if the brick doesn't want to be stoic and solid, can the brick be manipulated to be wild and transparent? The goal is to go beyond it's obvious brickness, to push the limit of the material in to the realm of the mysterious unknown while still maintaining respect for the brick. Not to create a lie, but to create awe and wonder.

I'm inspired a lot by Stanley Kubric's films, the way his movies are grounded in the known but still manage to pull the rug out from under you and make you think 'What the fuck?"

So, that is interesting to. I asked Steve for some examples to illustrate this point. 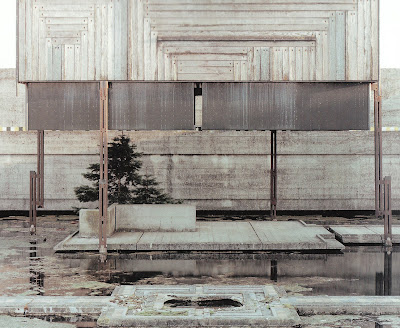 The water pavillion at Brion Family Tomb in Vicenza, Italy by Carlo Scarpa. His use of materials and fetished details are masterful. Note how the concrete has the formwork impression intentionally considered and with various textures. The metals too with their stains and patinas, like the concrete, invoke time but also let the material be the material with richness of character. Nothing is polished over, but is still carefully crafted and detailed with intention. 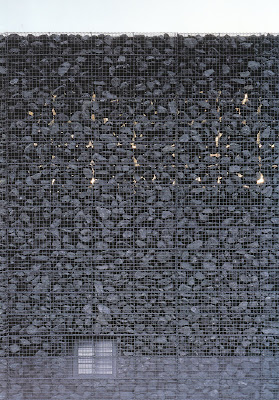 Dominus Winery in Napa by Herzog & DeMueron. The skin of the building are local rocks encased in a wire mesh, acting more like a veil than a solid stone wall. It's beautiful. 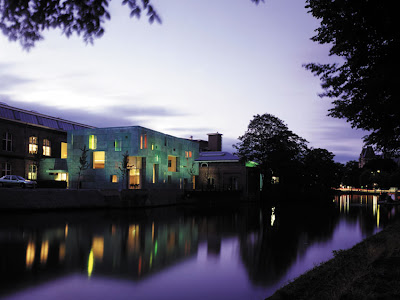 Sarphatistraat Offices in Amersterdam by Steven Holl. The perforated bronze is patined and contrasted with the brightly colored panels and windows behind. The aspect of time is acknowledged in context and material. What appears simple is actually quite complex and sensuous. 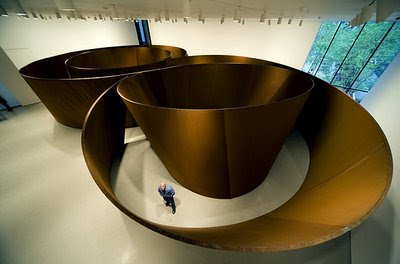 Richard Serra's Torqued Ellipses. Artists are much more adept at materials than architects and Serra's work and treats thick, heavy plate steel like flimsy rubber bands while flaunting the immense weight and texture of the Cor-Ten steel.

Fascinating. Totally fascinating. The thoughts of Edward and Steve and the work of Mies and Serra forces you to think about what is authentic. The immaculate clarity of material and purpose of Mies creates an exciting connection to the space in which the structure sits. But, the sinuous heft of Serra and the uncommon use of natural materials of the Dominus Winery really make you think about what natural is.