More on the Ford Gyron 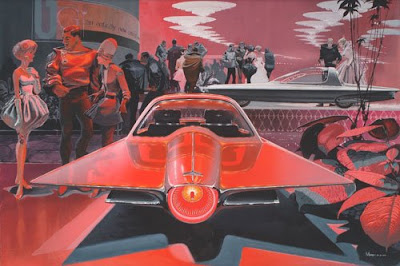 Alex Tremulis, the Gyron's designer, is profiled in the December 2008 issue of Collectible Automobile, which is available at newstands now. It has a couple of paragraphs on the Gyron. "This was an advanced. slippery vehicle on tandem wheels, kept upright by a two-foot-diameter gyroscope. For stability, there were two retractable outrigger wheels mounted toward the rear on each side."

The article says it had a jet engine, but it doesn't specify whether it actually ever ran.

Collectible Automobile magazine does not appear to have a website - or it is very well hidden. However, there is a nice article about the gyroscopic stabilized Ford Gyron on wikipedia. Though interesting technology, it was a no-go showboat that was never intended to be put into production.

Collectible Automobile Magazine at Amazon
The Illustration of Syd Mead
Ford Gyron at Wikipedia
Posted by Mister Jalopy at 11:46 AM
Email ThisBlogThis!Share to TwitterShare to FacebookShare to Pinterest
Newer Post Older Post Home