Tender is the Night - First Edition 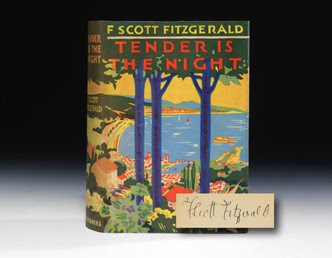 First editions. I waffle on their importance. Generally, my interest in books only necessitates a "nice, tight reader's copy." This exquisitely illustrated book jacket certainly adds something to the words. And, Bauman's once again makes a compelling case for the book as a footnote in history - beyond the contents between the covers.

In 1925 Fitzgerald published The Great Gatsby to immediate critical acclaim and popular success. Eight years later, he was no closer to delivering another novel. His editor at Scribner’s, the legendary Maxwell Perkins, worried about Fitzgerald but never lost faith, writing to him in August of 1933, “Whenever any of these new writers come up who are brilliant, I always realize that you have more talent and more skill than any of them; but circumstances have prevented you from realizing upon the fact for a long time.”

Circumstances, indeed: in the intervening years the country plunged into the Great Depression, his wife Zelda suffered a nervous breakdown and had to enter a sanitarium for long-term care, and Fitzgerald struggled with alcoholism and the difficulty of ever surmounting his own reputation following the near-miraculous Gatsby. “The man who started the novel,” he remarked after publication of Tender Is the Night in 1934, “is not the man who finished it.” Reception was mixed and while the novel sold well for the Depression era, Fitzgerald had hoped for so much more.

It was the last novel he would publish in his lifetime, perhaps the final solid step before the dissolution that would so closely parallel the tragic decline of Dick Diver in Tender Is the Night.