We love getting mail at Dinosaurs and Robots, even if most of it is inquiring where to buy the Telstar Logistics Limited Edition Hello Kitty dump truck. Hint: it was custom built by Todd for his daughter and is not for sale. 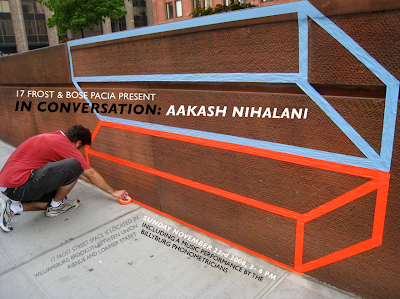 Aakash Nihalani
We have featured Aakash's work before and he dropped us a note to let us know he is going to be giving a talk in Brooklyn. I'd go!

I'm sure you've already been sent this a few times, but they're a German group called Dschingis Khan.

It became quite the meme in its day. In fact, at the University of Chicago (where I go to school, and where we have a mad-awesome scav hunt), we had to do our own performance of the song, dancing and everything. I can't find any YouTube video of it, but there are plenty of other videos full of Scav awesomeness on the Tubes.

Miss Demontagia Risque Novelty
Although D+R reader Michael says the trick is simple, I still don't get it.

the miss demontagia thing is pretty simple, the darker bits are printed on the lower levels. because they're dark they block out the naked woman printed on the closest piece of acetate.