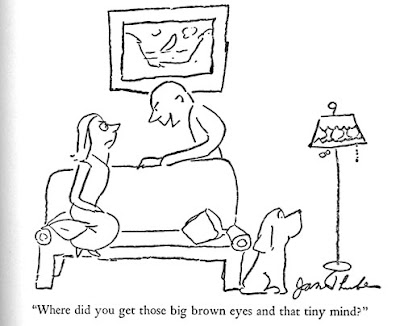 This is my favorite Thurber cartoon (from Alarms and Diversions, Harper & Brothers, 1931). The dog looking up at the lamp is a nice touch.

A friend told me that Thurber had once doodled all over some tablecloths in a restaurant in New York. I tried to research this, but could only turn up an article from American Heritage, originally published in 1965. The artistically enhanced tablecloths were discovered during the cleanup after a birthday party for Thurber's agent, Glides. Gildes decided he wanted to keep the the tablecloths Thurber had drawn all over, but they were badly stained from the party. I was thrilled at the solution for preserving his drawings on the tablecloths (which were photographed for the magazine, but no photos appear online):

...if it were sent to the laundry, the pencil lines of the drawings would obviously wash out along with the beer and the steak juice. A friend who had also been at the party—Mrs. Elizabeth McGhee, “Buddy” for short—suggested a solution, and somewhat dubiously the Glides gave her the cloth. When they got it back it was spotless, and all the drawings had been preserved in neat blue embroidery.