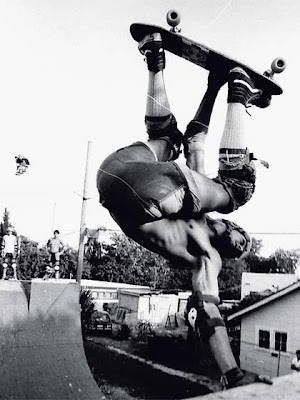 It's unfortunate to see companies like Nike who have bought their way into skateboarding instead of paying their dues. They suck the value out of sports by throwing around money the way they do.

When I was a kid skateboarding in the late 1970's and early 1980's, I lived by the aesthetic of Skateboarder magazine. The only shoe that mattered was the classic red and blue Vans lace-up that Alva, Peralta and the other fellas were wearing. One day, my mom and I were driving by a Payless Shoe Store and they had a window poster for red and blue Vals Off-the-Boards for $8.99. Flipping out, I explained that these dingbats didn't even realize what they were selling, that they were actually the coveted Vans Off-the-Wall. My mother didn't challenge me on the issue, as I think she was thrilled that I wanted a pair of shoes that only cost $9.

Suffice to say, I was the dingbat. Payless knew exactly what they were selling and I learned a lesson in branding as my toe peeked through the canvas within a week.

Surprisingly, Vans sells 8 million variations of the classic Keds-style lace up, but not the red and blue version burned into my memory.