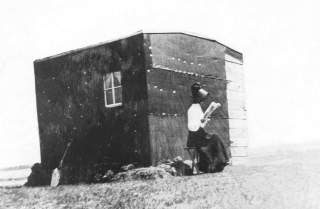 As a fan of ghost towns, I have spent a considerable amount of time investigating the old mining camps of the Mojave Desert. If there is one constant in their construction, it is the ubiquitous reliance on tar paper to seal the gaps between the boards. Usually on the interior between the studs and siding as a barrier against wind, the most modest structures often have the tar paper as an exterior sheath.

Our man Bjørn sent the quick explanation of the article accompanying the above photograph:

When immigrants came to America, they could stake a claim to a piece of land by living on it for three years.

Mina Westbye (1878 - 1969), pictured, lived for three years in this little shack on the Dakotan plains. Her plan was to sell the land once it was rightfully hers, and invest in equipment to become a professional photographer, but in the end it didn't turn out that way.

Of 700 000 thousand emigrants from Norway to the US, 400 gave their profession as "photographers", over one third of these were women. 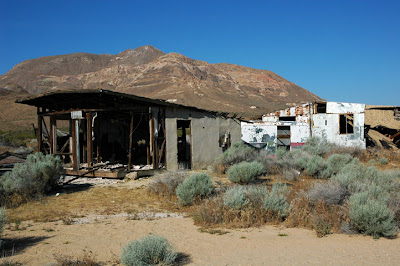 Though many ghost towns have been scrapped and burned down by scavengers and squatters, there are still examples that are very accessible. This little encampment is right at the side of the road and mere mile off Highway 14 as you approach the town of Mojave.
Mining Camp Photos: Mister Jalopy 2005 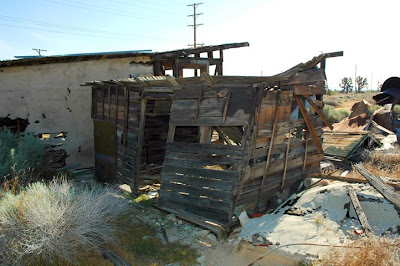 It seems the leftmost corner is holding the whole thing together. 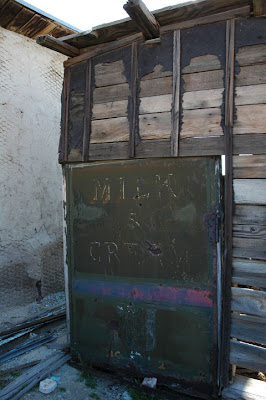 Homesteading laws varied regionally, but in the Mojave there are still communities of inhabited shackitecture cabins that were built when you could claim 2.5 acres if you built and lived in a structure.

As discussed on D+R previously, the local zoning and building departments represent an impregnable, byzantine bureaucracy so difficult to navigate that it often becomes an insurmountable obstacle to amateurs. Of course, those departments do a terrific public service that is necessary for civilization to continue, but I think there is a possibility to refine and streamline these departments to serve individuals.

There are communities dying from lack of investment, dwindling population, dying industry and a diminished tax base. Imagine a progressive rural community that opened a shackitecture/homesteading office - a building department that didn't tell you what you can't build, but what you can build. How would it work?


Quixotic? Perhaps. But this is within reach. When we talk about the trillions spent to prop up our faltering country, this is the type of investment that will build tomorrow. Think of the communities that would be created.

I thought I was just going to write about tar paper this morning.