Last week, D+R guest blogger Coudal linked to a wonderful gallery of Volkswagen cargo vans that had been emblazoned with the advertisements of the companies that relied on them.

Luckily for me, I have had the chance to lay my hands upon this beautiful machine before it was sold to the the current owner. The logo work is incredible, and it is a pretty damn clean bus. The rocker rust is unfortunately typical of Northern Colorado buses, this one having come from Denver where it delivered booze in the 60's. The price is a bit unreasonable at $22,500, but than again so are the prices on all small hatch transporters these days. I hope by some stroke of luck this bus is bought back by a Coloradoan with some respect for cheap liquor and quality vehicles. Lets just hope they don't drink and drive. 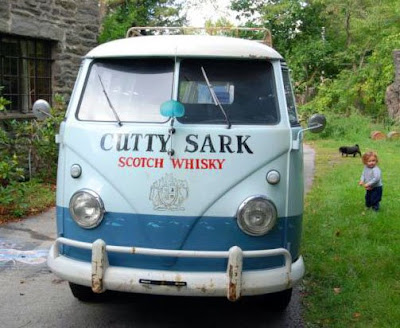 I agree that $22,500 feels a little high for a bus with this much rust, but in ten years, it will probably feel cheap. Plus, it is just so damned unique. And so charming. Though I would like to have this bus, it really makes me want to paint a driving billboard on one of my existing vehicles.

1959 Volkswagen Cutty Sark Kombi for Sale at The Samba (Thanks, Luke!) 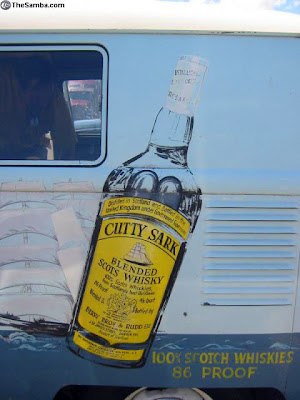