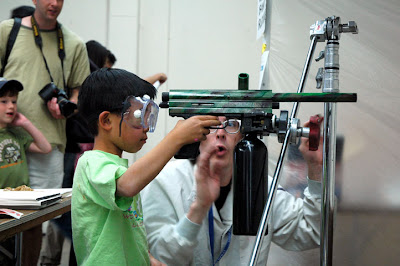 A pretty typical moment from
Zen Paintball at 2008 Maker Faire, San Mateo
Photo: Mister Jalopy
People are always asking us, "Why do you have so many guest bloggers and why don't they ever go away?" Actually, nobody has ever asked that. Of the considerable joys and satisfactions that come from editing Dinosaurs and Robots, definitely the most rewarding aspect is seeing where our guest bloggers take us.

1. We love his blog extremecraft.
2. He is a dynamic and entertaining speaker. His Extreme Craft talk at 2008 Maker Faire was a standpoint presentation of the weekend. Do not miss an opportunity to hear Garth speak.
3. Has a great new solo show in Philadelphia.
4. Moved to Eureka, CA. Who does that?
5. Had the good sense to marry Claire Joyce.
6. Boldly optimistic. Garth and Claire ran the Zen Paintball at Maker Faire. As the weekend was just starting, I tried to convince them that this was a bad idea. Noble and empowering, sure. Kids making art with paintball guns - inspired. But, come on! It had disaster written all over it. Unconvinced, they shrugged and persevered.
7. Remains boldly optimistic. As I checked in on Garth and Claire over the weekend, they were tired yet undefeated. I would have been sobbing by Sunday afternoon, but they were having fun throughout.
8. Garth is the editor/writer of the forthcoming 1000 Ideas for Creative Reuse. Submit ideas for inclusion here.
9. Host of Reconstruct! Fun!
10. Most importantly, the idea of extreme crafting suggests lots of winks and dismissive guffaws. But to read Garth's blog and to hear him speak is to realize he LOVES extreme crafting. And that love is contagious. 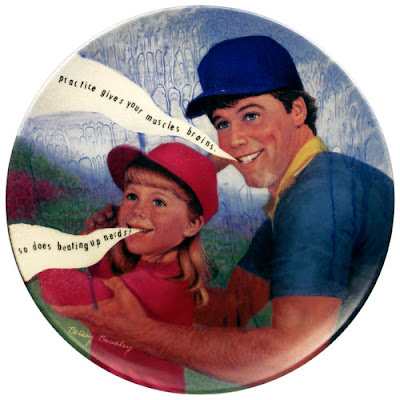 Recent work from Garth: novelty collector plates, remixed
From Garth's solo show at The Clay Studios Bonovitz Space
Garth Johnson is a Eureka, CA based writer, artist and educator with a raging craft problem. His website, Extreme Craft, is a compendium of art masquerading as craft, craft masquerading as art and craft raising its middle finger. He is the co-host of the upcoming DVD "Reconstruct" and he wants to publish your projects made out of reused materials in his upcoming book, "1000 Ideas for Creative Reuse."
Posted by Mister Jalopy at 5:56 PM
Email ThisBlogThis!Share to TwitterShare to FacebookShare to Pinterest
Newer Post Older Post Home