From the Museum of Supplies: Real Thin Leads 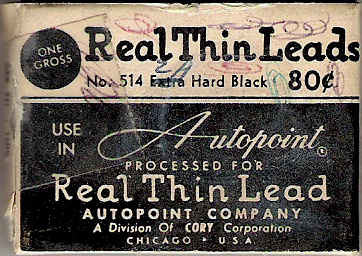 Michael Leddy of Orange Crate Art ran the first post in an occasional series he calls "From the Museum of Supplies."

I admire this arrangement in ivory and black: the tilting balloon of "ONE GROSS," the lower-case "e's" and "l" of "Real Thin Leads," the jaunty cent sign, the chuckle-headed repetition. Real Thin Leads. Real Thin Lead. Ask for it by names! And I admire the cursive Autopoint, the forward-looking sort of cursive one might see on a home appliance.

And I like that this little package has been marked by history: at least three different writing instruments, green, red, and purple, have been tested on its surface. Just scribbles — no room to inquire Does this pen write? One side of the package has been resealed with tape in a hapless effort to honor a stern directive: "SEE THAT THIS SEAL IS NOT BROKEN." Ah, but it has been.

The "2H" correction — made in the store, I assume — is a reminder that some people are persnickety about their pencil leads. The potentially misleading "Extra" won't do when the unambiguous "2H" is at hand.