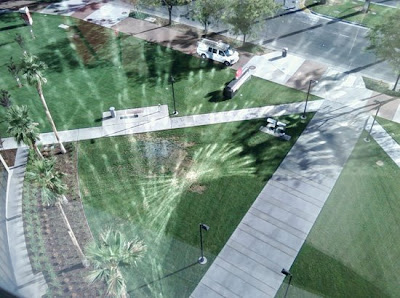 Parabolic facade scorches sod. Like a kid with a magnifying glass. Via Pruned

When confronted with the self-organizing leaf pile, I suspected a serendipitous event had created a miracle beyond the architect's original intent. Though this instance was accidental, the idea of a constructed landscape using available natural resources for physical work was too cool to let slide. Sure, solar/wind are natural weather events harnessed to generate electricity. And a windmill might power a water pump. But were there other instances of 'ghost work,' like the self-organizing leaf pile?

So, I asked Alexander, of the superb agro/tech/landscape/architecture blog Pruned, and his response follows:

Haven't heard of anyone doing what you imagined, though I've heard of the atrium of a building used to create an artificial tornado. Maybe two buildings: one was a pavilion at a world expo and the other was the HQ of an automaker, perhaps BMW? -- can't be too sure, as I'm working from clouded memories here.
In any case, I'm somewhat reminded of that building in California whose curved facade was reflecting sunlight onto the front lawn, resulting in dead patches of sod.

If the landscape architect had predicted this event, it would have been a perfect place for a cactus garden. Or a solar oven!

A little Googling finds the Mercedes Benz Museum's atrium tornado, which was built as a safety feature to exhaust smoke in case of a fire. Along the way, Mercedes picked up a world record for tallest interior tornado from the Guinness Book. Knowing that it is Mercedes, knowing their automobiles, one would have to assume that the tornado will require extremely diligent service and the replacement parts will be hugely expensive. Ongoing maintenance will probably be slightly less spendy than keeping a 1994 Mercedes S600 on the road.
Thanks, Alexander! Visit Pruned!
Posted by Mister Jalopy at 9:26 AM
Email ThisBlogThis!Share to TwitterShare to FacebookShare to Pinterest
Newer Post Older Post Home