I spotted this Technicolor "Instant Load Mark Ten" at SF's Video Transfer Center. According to the gent who owns it, this late 1960s-vintage Super 8 camera looked great, but it wasn't very good at taking home movies. Form over Function? Perhaps, but what a stunning piece of design! Flickr user John Kratz owns one (shown just above), and here's how he describes it:

The Technicolor Mark Ten is a movie camera for super eight film cartridges. It's got an awesome 12-36mm 1:1.8 zoom lens, and it was made around 1966 or 67, which is no surprise since it looks like it's straight out of the original Star Trek series. There's not alot of information about this camera on the web, but one source says it was made by Minolta. Had to have this one!

I understand the feeling. Happily, I also managed to find a link to a scan of the owner's manual for the Technicolor Mark Ten: 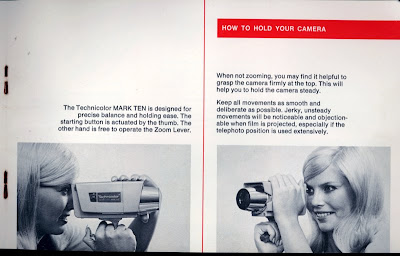