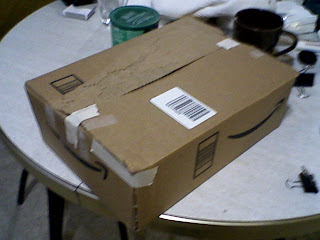 J.S. Van Buskirk is an Atlanta-based poet who enjoys choosing unexpected media for her message. I was a huge fan of her "Info Demo" lecture series, where she would choose a "loose" theme, then pick lecturers to explore the theme, using PowerPoint, music and other visual aids to explore that theme. JS would invariably show up in her ultra-sharp vintage flight attendant uniform, firmly (but graciously) guiding the audience to enlightenment.

A longstanding Info Demo tradition was the "Guess What's in the Box" contest. Before the lectures, J.S. would seal a mystery object in a box. As the audience filtered in, they would write their guesses down on scraps of paper. At the end of the night, J.S. would gather the scraps of paper, and through a process metaphysical poetics, divine the guess that was closest to the object in the box. The correct guess was never literal, of course, and flights of imagination and intuition were always liberally rewarded.

"Guess What's in the Box" has been adapted to suit Ms. Van Buskirk's new favorite medium, TWITTER. Check out the picture of a box above. Here is the her best description from her website, Pandora's Skull:

The dimensions of the box are 9.5" x 13" x 4.5". My husband describes the heft of the box as follows: weighs 1 or 2 lbs, most of the weight is on one end of the box, no loose movement, no sound of anything shifting when box is tilted or rotated.

If you live in the continental United States, and you would like a chance to win the contents of the box, just send a TWEET with your best guess, and include the hash tag #gwiitb (for guess what's in the box, natch). If you'd like more information, check out the list of rules HERE. You have until 8:49 on Monday morning, Eastern Standard Time. I already made my guess, and I'm sticking to it.