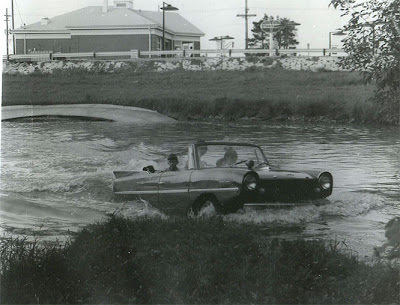 (click photo for big) I just returned from a family visit to Arkansas where my grandmother's house is about to undergo an auction. Rifling through mounds of old photos, I came across two particularly odd and mysterious ones. The above photo clearly shows my mother in the front passenger seat, and my older brother behind her. We can't identify the driver, and my mother has no recollection of this or explanation. Mr. Jalopy? Perhaps you could at least tell us what car this is and if it was intended for amphibious excursions. (Update: My fellow guest-blogger Todd Lappin had the answer!) 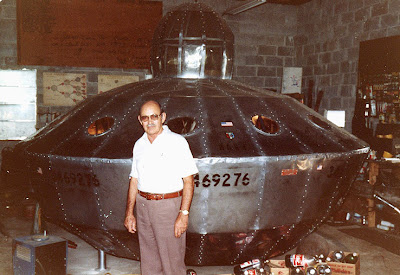 (click photo for big) Next mystery photo, even more intriguing! I have a better idea what this photo might be about, but it's pure conjecture. My grandfather (that's not him) was a Cessna pilot for Arkla Pipe and Gas in the 40', 50's and 60's. He was also a firm believer in UFOs, claiming he and a co-pilot had witnessed an aircraft with abilities to change direction and altitude at speeds not known at that time. Irrefutable proof of life on other planets, naturally. This is one of his flying buddies in the photo, but where he is, I have no idea.

The photo is dated September, 1981, and the name written on the back is "Breck Laughter". Are we to assume this is the builder with his own creation? At first glance, I thought he was at some sort of museum, but it's clearly a personal shop / garage (someone whose inspiration is fueled by lots and lots of Coca-Cola) and there is a fascinating diagram on the back wall. There is also a wooden mural with biblical quotes on it. So, I'm guessing this is a fantastic, steel-riveted vision for a craft to provide bona-fide interplanetary travel and possibly, divine, transport.
Posted by Jenny Hart at 7:51 AM
Email ThisBlogThis!Share to TwitterShare to FacebookShare to Pinterest
Newer Post Older Post Home