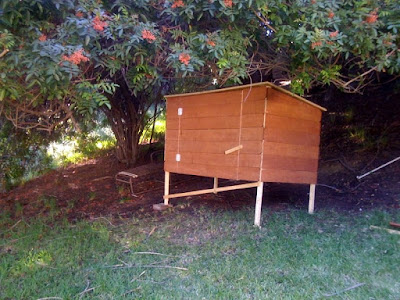 It’s hard to be a homesteader if you keep changing homes. I’ve moved 21 times since I was born. When we moved into our house in Tarzana, I was hoping it would be the last time we moved. It was a perfect house for us, or so we thought. It had about a dozen different kinds of fruit trees, a half acre of flat land that was perfect for gardening and starting an orchard, and the house itself was a restored 1930 farm house that was bright, open, and cheerful. Our friends liked hanging out in the large room that extended the length of the house, incorporating the living room, dining room, and kitchen. The chicken coop was large and comfortable for my hens, which were producing four nice eggs every day, and they had the run of the yard. I had killed my front lawn, and was getting ready to add some raised bed planters to grow vegetables. And I’d staked out an area of our large side yard to start a fruit orchard. In short, our place in Tarzana was perfect to explore self-sufficiency and DIY living.

But a couple of months ago, Carla and I decided to move about 15 miles east of Tarzana, to another LA suburb called Studio City. We wanted to move for several reasons. One, the elementary school in the district was excellent, so we could send our six-year-old there instead of an expensive private school. Two, the house was Carla’s childhood home, and she loved it. It was situated on a one-acre lot in the hills that separated West Hollywood from the San Fernando Valley. Three, the climate was milder in Studio City than Tarzana, which is the hottest place in Los Angeles. Summers in Tarzana are scorchers, filled with multi-day runs of 100 degrees-plus weather in June through September. Our water bill was ridiculous.

The house we were moving into didn’t have a chicken coop, and I wanted to bring our chickens with us, so I had to either make or buy a new coop, and deal with the problem of coyotes, which are rampant in the hills of Los Angeles. For weeks, I vacillated between buying or making a coop. I was tempted by the colorful and stylishly rounded coops made by Eglu, which looked a little like the original iMacs. They came with fenced-in pens, which would take care of the coyote problem. But as cute as the Eglus were, I couldn’t bring myself to buy something made out of plastic. Carla had already gotten upset with me the year before, when I bought a black plastic garden cart that she declared to be hideous. When I showed a photo of the Eglu to Carla, to my surprise she liked it and said it would be fine to have in the back yard of our new house. But she had already converted me into a plastic-hater and now there was no going back.

I looked around online at the dozens and dozens of wood chicken coops available, and I became paralyzed by the abundance of choices. I couldn’t make up my mind. While each coop was different, they all shared something in common that bothered me — they all seemed unnecessarily complex. Some were built to look like miniature barns, others like little prairie schoolhouses or cottages. I didn’t want a coop with a shape that made it hard to access the interior. I wanted something dead simple: a box raised off the ground with room inside for a nesting box and a roosting perch, and nothing else. I decided I’d have to build such a coop myself.

I started to use Google SketchUp to design my Dead Simple coop. But after a while, I realized that I probably didn’t need to design something so basic in advance. I just went to the lumber store and took a look at what they had. Since I don’t have a feel for lumber dimensions, I thought it would be better to see lumber in person, so I could get an idea of how different sizes could be used for different structual elements. When I saw the 2x2’s I realized they they would be strong enough to serve as the four stilts to keep the coop off the ground. For the siding, I wanted to avoid using plywood, because I don’t like the way it looks. Instead I found some 6-foot-tall, 5-inch-wide fence slats that would make for attractive siding. Using these fence slats, I decided my coop would be six feet long and three feet deep. I pulled out my phone and used the calculator function to estimate how many slats I’d need: 21. I bought about 7 sticks of 8-foot-long 2x2’s and an equal number of 1x2’s. I also bought a roll of chicken wire (or “poultry fencing” as the manufacturer called it, to make it sound fancy), a pair of door hinges, and a corded electric drill to drive the screws. It took some effort fitting all this into a Volkswagen Beetle, but by folding down the back seat and leaning the front passenger seat all the way forward I managed to fit everything in.

I drove to our new house with the materials and carried them into the back yard. The spring day was clear and the air was the perfect temperature where you didn’t think about how warm or cool it was. As I measured, cut, drilled, and assembled the pieces of wood according to the rough plan in my head, I thought about how far I’d come since I started my experiment to start doing stuff myself. I felt more confident about the project because I’d become more familiar with the way lumber behaves. I also understood the functions and limitations of the tools I was using. And, perhaps most importantly, I was comfortable with the idea that I might screw it up. And who cared if I did? As long as I eventually produced a chicken coop that kept my hens safe and dry, it didn’t matter what happened.