Maurice Calka Fiberglass Desk for the Conquest of Space 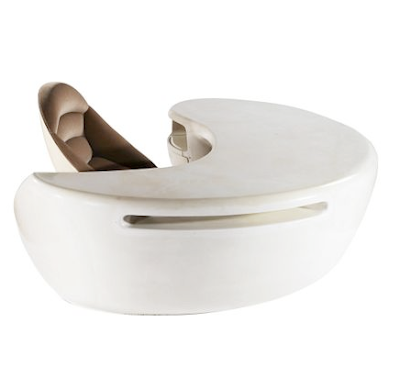 Ok. I tend to steer away from Star Trek chic, but this desk has pushed me over the edge. In a sort of dumb struck, drool-y way I keep ogling as if I think there is some possible way to buy a $100,000 space desk. Day to day, I concern myself with issues like should I pre-pay my coin laundry burgler alarm bill in total to reap the annual discount? Where did I put that worker's comp audit? Am I eating too many eggs?

If I had this desk, I am certain that my focus would change... Who should be included in the Coco's Variety Biennele? What fruits should I graft together to create a new succulent fruit with the juice of a plum and the durability of banana? Should I buy GM? Who says I can't 'conquer' mars? 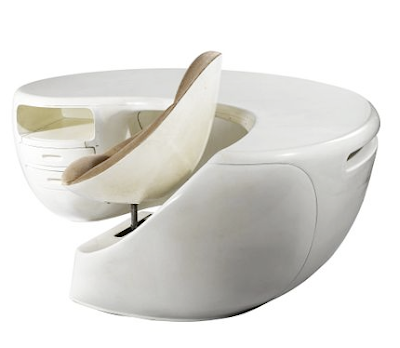 Integrated Chair
From the Sotheby's catalog:

It is thought that only four or five P.-D.G. desks were ever made. The current lot is a previously unknown example.

The following year a smaller variant of the P.-D.G. desk, the Boomerang, was introduced. This was produced in larger numbers (thought to be around 35) and varying colours and did not feature the integral chair of the rarer early model.

The P.-D.G. was an icon, indeed President Pompidou owned one and placed it in the Elysée Palace. Today it is celebrated as a seminal piece of post war design, combining a pioneering use of materials with the Pop Art sensibilities of the day.

Previously on D+R, other amazing stuff at auction
Posted by Mister Jalopy at 7:34 AM
Email ThisBlogThis!Share to TwitterShare to FacebookShare to Pinterest
Newer Post Older Post Home