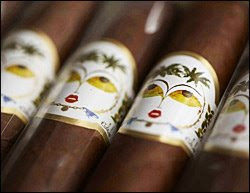 I know someone who enjoys a good cigar, as well as the work of the Toledos, who might find this of interest:

Ruben Toledo, the brilliant Cuban-born artist and illustrator, has created a limited edition cigar box and band which will be sold to benefit El Museo del Barrio, the nation’s premier Latin American and Latino Museum. A luxurious white lacquer box featuring black silhouetted designs by Toledo inside and out will be produced by one of the world’s leading cigar makers, La Flor Dominicana. The cigars have been created uniquely for El Museo del Barrio each with a gold-embossed band designed by Toledo. All profits of the project will be donated to El Museo del Barrio.

Previously on D+R:
The Impossible Cool: Isabel and Ruben Toledo
Posted by Jenny Hart at 8:26 AM
Email ThisBlogThis!Share to TwitterShare to FacebookShare to Pinterest
Newer Post Older Post Home