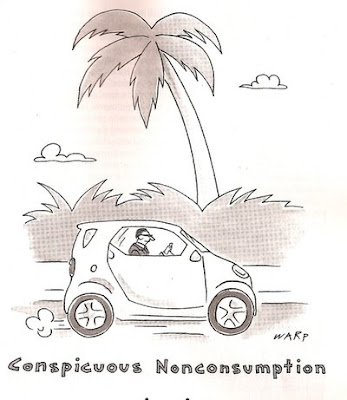 Unconsumption is a word used to describe everything that happens after an act of acquisition.

Unconsumption is an invisible badge.

Unconsumption means the accomplishment of properly recycling your old cellphone, rather than the guilt of letting it sit in a drawer.

Unconsumption means the thrill of finding a new use for something that you were about to throw away.

Unconsumption means enjoying the things you own to the fullest – not just at the moment of acquisition.

Unconsumption means the pleasure of using a pair of sneakers until they are truly worn out – as opposed to the nagging feeling of defeat when they simply go out of style.

Unconsumption is not about the rejection of things, or the demonization of things. It’s not a bunch of rules.

Unconsumption is an idea, a set of behaviors, a way of thinking about consumption itself from a new perspective.

Rob is also the author of Buying In: The Secret Dialog Between What We Buy and Who We Are and the blog Murketing. I've had the pleasure of talking with Rob on numerous occasions over the years about the swelling of interest in hand-making, recycling, independent entrepreneurship and the new frontiers the internet introduces to the marketplace. His focus on the Maker and DIY movement has offered a really enjoyable perspective on the significant shifting and merging of multiple movements (feminism, crafting, environmentalism, independent workers) and how they all interlace and contribute to one another.