Bruno Schulz in The New Yorker 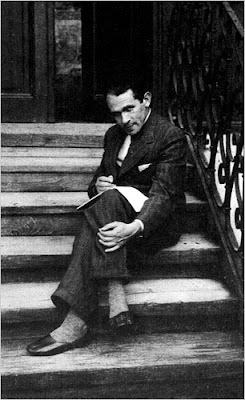 The current issue of The New Yorker (June 8 & 15 2009) has a heartbreaking account of the death of the singularly fascinating Polish writer and artist Bruno Schulz. Schulz, an exceedingly quiet and unassuming schoolteacher, was shot by an SS officer in a Jewish ghetto, but the story surrounding how and why he was shot entails elements of forced creativity and callous destruction.

Schulz had a protector, a Nazi officer who coerced him to create painted murals for his child's nursery. The murals were discovered by a documentary filmmaker in 2001 and displayed in New York earlier this year. The damage they suffered coupled with the Romanesque subject matter gives them the appearance of unearthed frescoes from Pompeii.

In reading Grossman's article (translated from Hebrew) which includes two eye-witness accounts of Schulz's death by former students of his, he touches on Schulz's curiosity about the "Age of Genius". Did it ever happen? Will it ever happen? How will we know? Has it passed? And in doing so, Grossman makes an exceptionally poignant and beautifully articulated remark about what such an "Age of Genius" would mean, rather than the tragically ensuing "Age of Destruction" that instead took place during Schulz's life:

An age in which everyone understands that killing a person destroys a singular work of art, which can never be replicated.

The New Yorker: The Age of Genius
NYT: Painting Under Coercion & Behind Fairy Tale Drawings

Previously on D+R: The Drawings of Bruno Schulz
Posted by Jenny Hart at 7:07 AM
Email ThisBlogThis!Share to TwitterShare to FacebookShare to Pinterest
Newer Post Older Post Home