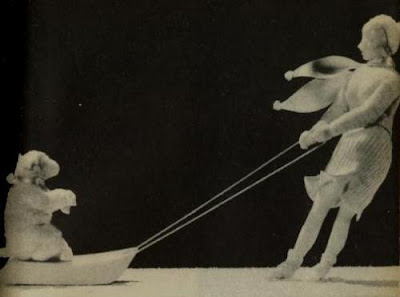 Funny that my fellow guest-blogger Robyn posted about incredibly carved watermelons, because I had been wondering about incredibly carved soap. (I shoulda called this entry "Too Beautiful to Shower With".) My father had a really lovely, but simple soap sculpture on his desk of a kneeling nude he'd made when he was about nineteen. It made me wonder if there were many other examples of soap carving, or if it had been a fad at one time. Looks like it was...

I was led to the New York Public Library's website where they had a nice entry on Lester Gaba, who wrote several books on the subject, and created numerous examples of soap sculpture that are astonishing in their detail. I was surprised to find out that this fad was launched as a marketing scheme by Proctor and Gamble:

...soap sculpture as a fashionable hobby was launched by Proctor & Gamble as a means of promoting brand loyalty for Ivory soap. The man behind this campaign was Edward L. Bernays, who has been called the Father of Spin. Proctor & Gamble sponsored a series of competitive soap sculpture exhibitions in the twenties, and winners took home cash prizes. Within the first three years of the campaign's launch, prizes totaling $1,675 were given to winners among no fewer than four thousand entries (as reported in the New York Times, June 6, 1928).