Have You Seen Me? Me, The Mailbox-Shaped NYC Post Office Of Yore? 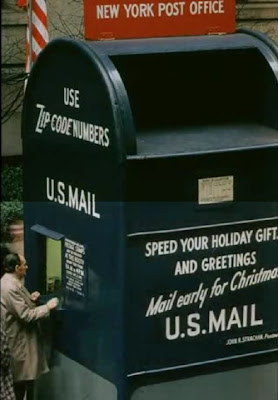 And here I thought all the thematically shaped buildings were down some 2-lane highway somewhere or in Los Angeles. I collaged this full image of a mailbox-shaped post office in New York City from a slow, time-lapse pan in Hilary Harris's 1975 documentary short, Organism.

While I was visiting New York City in that era, no one apparently saw fit to take me to the post office, so I have no idea where it was, when it went up, or when it came down. Though I'm pretty sure there's a Gap or a Starbucks on the site now.

update: Thanks to D+R reader Tim, who tracked down the 1979 Times obituary for John R. Strachan, New York City's postmaster from 1967 until his death. And it turns out Harris shot Organism over the course of 15 years, from 1959-1974, so there's a 7-year window.

You can watch Organism and several other of Hilary Harris's films in their entirety at the incomparable UbuWeb. [ubu.com]
Posted by Greg Allen at 7:33 AM
Email ThisBlogThis!Share to TwitterShare to FacebookShare to Pinterest
Newer Post Older Post Home