The Next Damien Hirst?

The valiant struggles of one farmer/aspiring painter in England give us all hope in the redemptive refuge that art can provide, especially for folks dealing with substance abuse or those trying to adjust to these straitened economic times.

After a hard-living whirl in London, where he ran a once-vast-now-shuttered medical & pharmaceutical display manufacturing operation, the middle-aged hero of Sarah Thornton's Times of London story swore off the sauce and turned to dairy farming. Though he hadn't picked up a brush since he was 16, he threw himself into painting with the urgency of a Groucho Club member looking for a glass top coffee table. 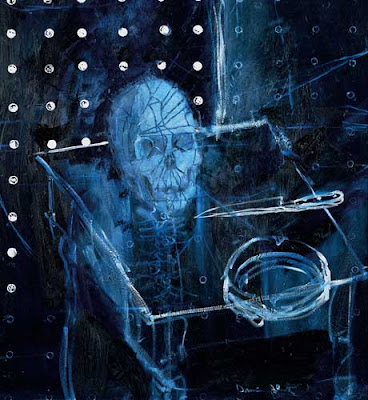 But first, he needed a space. A converted railway signal house on the farm would have to do:

Modest isn’t the right word. Shabby isn’t either. It’s a nostalgic fantasy of a bohemian painter’s shack. The wooden facade is covered in drips of turquoise and splashes of black. Inside, it’s dark, crowded and garret-like, with exposed rafters and bare light bulbs, reminiscent of Bacon’s studio. A dozen canvases are stacked against each other; some face out, others stare at the wall. A pathway through the clutter leads past a mirror and dishevelled bed to three paintings-in-progress depicting Medusa heads. The gorgon works are arranged in a standoff with a real taxidermy bear, whose fur is covered in broad brushstrokes of red and white paint. The mise en scène suggests that the bear might have been turned to stone by the women’s angry glares.

After an encouraging private viewing at a friend's place in Kiev last spring, he has managed, at some not-inconsiderable expense, to secure an exhibition hall for the first public show of his paintings. We're all artists now!

No Love Lost, Blue Paintings by Damien Hirst, opens at the Wallace Collection October 14 and runs through January 24, 2010. [wallacecollection.org]
The reinvention of artist Damien Hirst [timesonline.co.uk]
Posted by Greg Allen at 6:44 AM
Email ThisBlogThis!Share to TwitterShare to FacebookShare to Pinterest
Newer Post Older Post Home