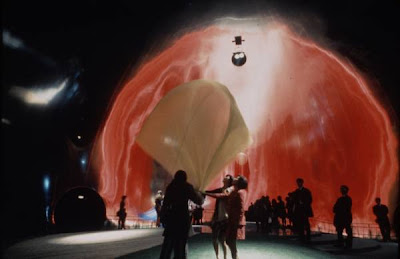 Giant, mirrored spheres of unusual artistic significance turn up in the most unlikely places, but a World Expo in the 70's is as good a place as any to look. Oh, there's one, the Pepsi Pavilion at Expo 70 in Osaka!

Truth be told, the Pepsi Pavilion was a failure, a cobbled-together colabo of artists, engineers, and marketing executives who had only the vaguest notion of what they were creating. In that borrowed origami dome, on the other side of the world, for a couple hundred thousand dollars, with those lasers, synthesizers, and smoke machines. And that 90-ft, inflated mylar balloon ceiling. They thought they were inventing The Future, but all they ended up with was the planetarium laser light show.

Life Magazine's Larry Burrows tried to capture the spirit of the Pepsi Pavilion in his photograph above, but you really had to feel it, man.
Posted by Greg Allen at 4:42 AM
Email ThisBlogThis!Share to TwitterShare to FacebookShare to Pinterest
Newer Post Older Post Home