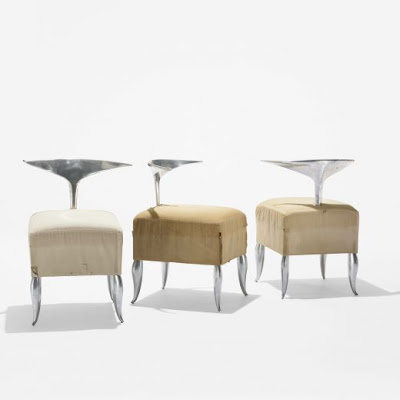 You know how the genie bottle-shaped lounge in Philippe Starck's 1988 Royalton Hotel lobby has that--oh, wait, that's right, I forgot. IT WAS DESTROYED IN 2007 by some clueless hotel conglomerate run by styleless, history-blind beancounters.

The gutting of New York City's most significant 1980's interior should have set off a preservationist outcry, but it didn't. And as much as I want to heed Chicago design auctioneer Richard Wright's unabashedly self-interested cry, I don't expect the sale Tuesday of Ian Schrager's personal collection of Starck one-offs and prototypes for the Royalton and its poorer step-sister hotel, the Paramount will lead to much, either. And not just because the sale's in freakin' Chicago.

Mostly, it's because the pieces just don't look all that significant, either on their own, or in terms of the Royalton project. The only exceptions might be designs that actually made it into use, like these ottoman-like chairs with classic Early Starck horn/wing seatbacks (est. $1,500-2,000). Or maybe this prototype for the velvet & aluminum benches (est. $2-3,000), or this mirror & aluminum cocktail table (est. $1,000-1,500). 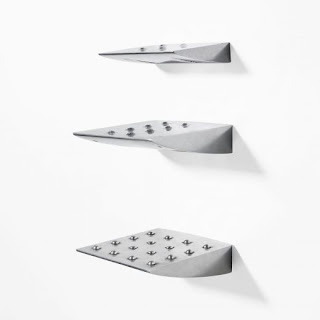 As for me, the only lot I'm really interested in is #522, three prototype Royalton soap dishes made of cast aluminum (est. $300-500). They'd go perfectly with the only Starck piece we care to own at the moment: the 3-piece plastic potty and toilet seat set he designed for Target.