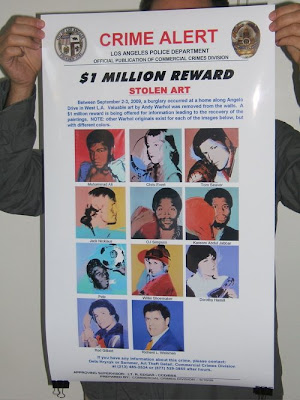 I admit it, I've been too focused on producing and distributing big, wall-sized versions of the LAPD's awesome wanted poster [above] for the eleven Andy Warhol paintings which were reported stolen last month from a collector's Westside home, and I never went to the Art Theft Detail's actual website. IT IS FANTASTIC.

The galleries contain information on the hundreds and hundreds of pieces of art have been stolen in LA over the years--and a few that have been recovered. The images barely hint at the stories behind the thefts. When I see dozens of works by an artist I've never heard of, I can imagine a portfolio being taken from a car. But then there's the dozen-plus major, early 20th century paintings which were cleaned out of a room in just a couple of minutes while the collectors were in another part of the house. And the little Isamu Noguchi bronze lawn ornament some knuckleheaded neighborhood kid might've chucked into the LA River as a prank. 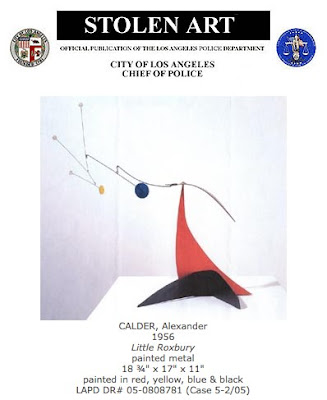 Anyway, here are my choices for LA's twelve greatest stolen artworks [that aren't Warhol Athletes.] If you have any information on their whereabouts, contact the LAPD!
Posted by Greg Allen at 7:36 PM
Email ThisBlogThis!Share to TwitterShare to FacebookShare to Pinterest
Newer Post Older Post Home