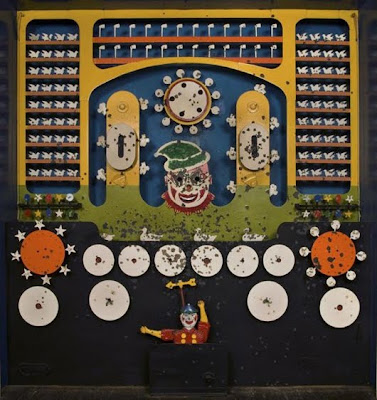 In a move they will surely come to regret, the mandarins at The Doris Duke Charitable Foundation decided that an environmental center based on a 2,700 acre New Jersey estate does not, in fact, need a turn-of-the-last-century, mechanized shooting gallery in the basement. Last May, the shooting gallery, which was apparently quite a popular feature at the free-spirited heiress's parties at Duke Farms, was sold at auction for $43,200, deinstallation and Duke gun collection not included.

It was designed by William F. Mangels, a pioneer of the amusements industry, whose Coney Island company invented, among other things, the mechanism for making carousel horses go up and down and The Whip.
Posted by Greg Allen at 5:40 AM
Email ThisBlogThis!Share to TwitterShare to FacebookShare to Pinterest
Newer Post Older Post Home