Pour One Out For Johannes Hevelius's Telescopes 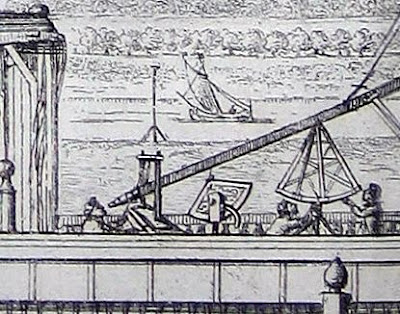 Maybe you're different, but I don't expect to be struck by sudden pangs of sadness when I browse the US Naval Oceanography Portal's small rare book selection.

Johannes Hevelius was a 17th century Polish master brewer and astronomer. He built a giant viewing platform across the roofs of his three adjoining houses in Gdansk to hold his awesome array of astronomical instruments, including a giant 45m focal length Keplerian telescope and massive sextants of his own design and fabrication. It was considered the best-equipped observatory in the world, and Hevelius and his wife/collaborator Elisabeth received successive kings and queens of Poland, as well as international colleagues like Edward Halley. 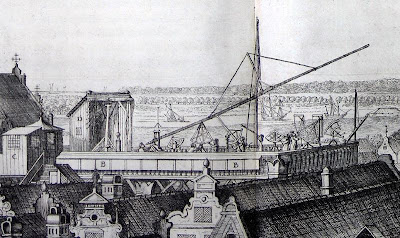 The first volume, lavishly illustrated, describes his instruments. Some plates show his wife, assisting him with the observations. The second volume, which gives his observations from 1630 to 1679, had just been returned to him by the printer, when a fire burned down Hevelius' house, destroying his instruments, library, and almost the whole edition of this work. Only a few copies survived, which had previously been sent to personal friends.

Wikipedia uses the phrase "maliciously destroyed," but offers no details. Perhaps someday a novelist will tell us what happened.

The Naval Oceanography Portal has several large images of Hevelius's set-up. [usno.navy.mil, via a bibliodyssey tangent]
A full scan of Machinae coelestis pars prior at Carnegie-Mellon's Posner Center looks like the 1969 facsimile edition. [cmu.edu]
Jonathan A. Hill, Bookseller, New York, lists a 1st. ed. of Machinae coelestis pars prior on Abebooks for $85,000 [jonathanahill.com]
Posted by Greg Allen at 5:11 AM
Email ThisBlogThis!Share to TwitterShare to FacebookShare to Pinterest
Newer Post Older Post Home