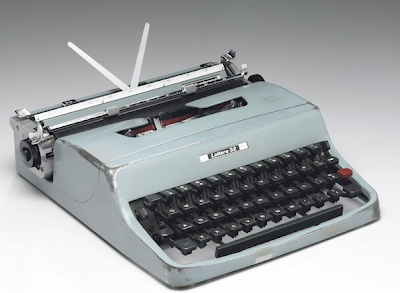 Cormac McCarthy has written more than a dozen novels, several screenplays, two plays, two short stories, countless drafts, letters and more — and nearly every one of them was tapped out on a portable Olivetti manual typewriter he bought in a Knoxville, Tenn., pawnshop around 1963 for $50.

Lately this dependable machine has been showing irrevocable signs of age. So after his friend and colleague John Miller offered to buy him another, Mr. McCarthy agreed to auction off his Olivetti Lettera 32 and donate the proceeds to the Santa Fe Institute, a nonprofit interdisciplinary scientific research organization with which both men are affiliated.

“He found another one just like this,” a portable Olivetti that looks practically brand new, Mr. McCarthy said from his home in New Mexico. “I think he paid $11, and the shipping was about $19.95.”

McCarthy's isn't the first typewriter to hit the bigtime: It's joining a posse of authors' typewriters that have become collectible. In fact, the Ransom Center in Texas has about a dozen in its collection, including an Olympia owned by "Perry Mason" author Erle Stanley Gardner, poet Edgar Lee Masters' Corona, a gold Royal belonging to Anne Sexton (below) and a few of Isaac Bashevis Singer's. Many of Singer's typewriters, including the one above right, were in Yiddish.