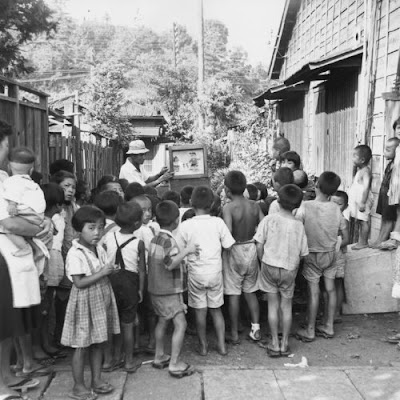 So for Christmas, my wife waved two of my favorite search terms--obscure + japaniana--over the Amazon cauldron and came up with a real winner: Manga Kamishibai: The Art of Japanese Paper Theater is a beautiful new book from Eric Page that explores an odd, incredible, mass medium that flourished in the early Showa Era, from the 1930's until the advent of television in 1953.

Thousands of storytellers would roll out across Tokyo every day with bicycle-mounted stages for showing series of hand-painted storyboards. It was like comic strip theater. Or rolling cinema.

Kamishibai featured Hollywood-style serials, ninjas and cowboys, and some of the first known costumed superheros. Like newsreels in the US, they were used for propaganda during WWII; their tremendous influence on public opinion led the US occupation forces to investigate and censor them.

Page's book is well-researched, but it's not academic; it's best as eye candy, and as a whistle-wetter. Almost all the kamishibai reproduced in the book come from two library archive collections; but now I want to start rummaging around for some of this original art.

Then if I just need to find someone to help me build an elaborate theater contraption on the back of a bicycle and...