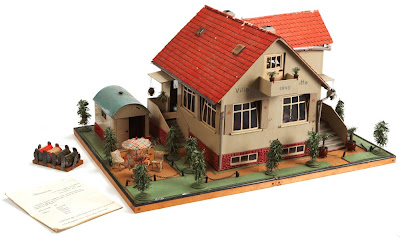 I just want to buy this house, then track down Unteroffizier Lederer's family and give it to them. You think that would work out?

Model of a German Prisoner of War's Dream House Built at Camp Livingston, Louisiana. This amazing project was constructed by Unteroffizier Erwin Lederer of Kreis Backnang, Württemberg during his internment as a prisoner of war in World War II. Lederer was held at the POW facility at Camp Livingston, Louisiana. During the day he and the other POWs would work cutting lumber and in the evenings he would work on his dream house.

Using little more than cardboard, crate wood, milk cartons, office glue, and paint, Lederer carefully cut, pasted, and painted a model of the home he dreamed of building upon his return to Germany. He named the project "Villa Lotte" after his fiancée. Each piece; from the trees, shrubs, hanging baskets, flower pots, and lawn furniture are numbered and meticulously placed on the base along with the chain border for the walkways and the picket fence that surrounds the house.

There are cut-outs of Lederer's German Sheppard dog, a housekeeper, and his future wife in evening dress. The base measures 24.5" x 33" and the house is 16.5" high when placed on the base. The windows are cellophane and the house is wired for electricity, the lights powered by four period dry cell batteries (included but not functional). The entire house fits into a specially constructed box, also out of cardboard and bits of wood, for eventual shipment to Germany. That was not to be.

United States authorities denied Lederer's request to ship his project home. Rather than abandon his dream home on a trash heap, Lederer gave it to a translator at the camp. He was able to take it home.

For the last sixty years it has been packed away in that veteran's attic. The house comes with five pages of instructions on the assembly of the house and grounds and notes on the materials used (in German). The notes also mention that Lederer spent 700 hours building his home. Some minor wear, else in very good condition. Estimate: $1,500 - $2,000.