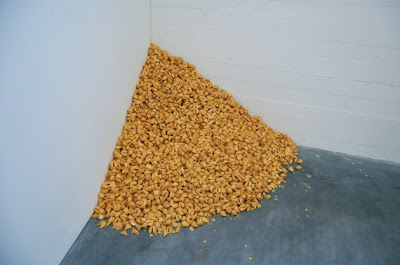 Felix Gonzalez-Torres was one of my first favorite contemporary artists. From the late 1980s until his death from AIDS-related illness in 1996, he imbued minimalist form and incredibly humble materials with powerful emotional and personal content.

Among his most well-known works are his pour pieces, where an "ideal" weight--usually around 180 lbs, the weight of Felix's partner Ross--of wrapped candy, free for the taking, is piled in a corner or spread across the floor. The pours upset the museum's typical hands-off! norms and turn into a living memorial as the candy gets taken and replenished.

At least that's how it eventually worked out. Felix's first pour piece, made in 1990, was actually Untitled (Fortune Cookie Corner), and it consists of around 10,000 unwrapped fortune cookies. Which end up getting broken and stale. And kind of gnarly, to the point that, unless you're there the first day of the show, you wouldn't really want to eat one. Plus, they attract bugs and stuff.

So art history-wise: very significant. Actually showing or owning it: kind of a pain.

Which may be why the piece failed to sell at auction in 2003, even at the seemingly conservative estimate of $600-800,000. Someone eventually bought it, though, because it's now at the Felix Gonzalez-Torres retrospective at WIELS in Brussels. The artblog 16miles.com has awesome photos.