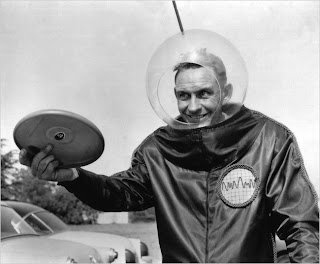 Fredrick Morrison, the man who invented the iconic Frisbee flying disc, has died at age 90. Morrison's disc, which he originally called the "Pluto Platter," was later renamed the Frisbee by Wham-O, the company that bought the rights to his invention in 1957. As Morrison's New York Times obituary explains:

Wham-O changed the name to Frisbee in 1958, influenced by the Frisbie Pie Company in Connecticut, whose tins Yale students hurled for sport. A Westerner whose plainspoken ways could be mistaken for gruffness, Mr. Morrison deplored the change.

“I thought the name was a horror,” he told The Press Enterprise of Riverside, Calif., in 2007. “Terrible.” (Before perfecting the Pluto Platter in 1955, Mr. Morrison had called earlier incarnations of his disc the Flyin’ Cake Pan, the Whirlo-Way and the Flyin-Saucer.)

But as his royalties mounted — he would realize millions of dollars over the years — Mr. Morrison revised his position on “Frisbee.”