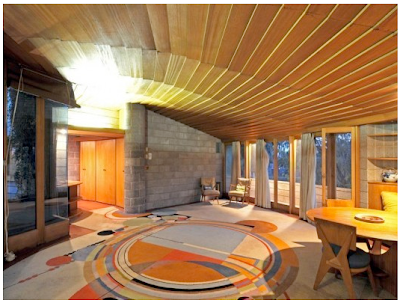 David & Gladys Wright's house in Arcadia, AZ has long been one of the major sites for the pilgrims of his father, Frank Lloyd Wright. FLW built it for them in 1951 out of concrete block, with Philippine mahogany built-ins and all the furniture, from the beds to the kitchen garbage can, to the massive, custom-fitted, abstract rug [above].

It's pretty spectacular, as far as rugs go. The design is apparently based on some early bubbly murals from the 1920s. The wall-to-curved-wall shape is so odd, you'd be tempted to leave it as is, floating in your even larger space. But actually, what you'd really be tempted to do is to cut it down to something more "manageable" that "works" in your [obviously architecturally inferior] space.

At which point you'd better hope the Cult of Wright doesn't have fatwahs or voodoo dolls or anything, because they would be even more pissed than they already are.