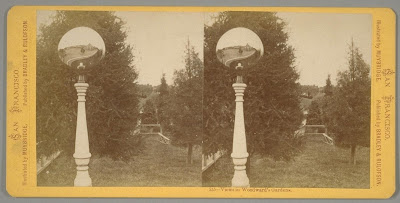 I've been on a backroad or two in my day, so I've seen smaller mirrored orbs scattered artfully across a lawn.

But seriously, what are those things, why are they, and where did they come from? Or to ask the real burning question, where can I get me some big 19th century silver ones, like they used to have in Woodward's Garden, the San Francisco ur-amusement park where Eadweard Muybridge took this photo of himself?

[Spotted at the first-ever Muybridge retrospective at the Corcoran, which is fantastic. Also, the real probability that this is not, in fact, Muybridge, and that many of his earliest photos were not, in fact, taken by him, is an entirely fascinating, other story.]