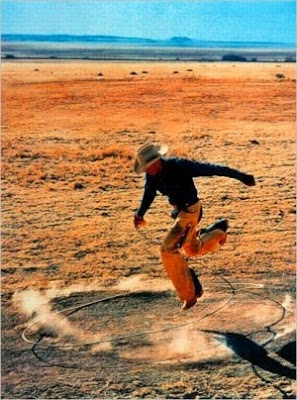 D+R permaguest blogger and all round great guy Greg Allen has a piece on 20x200! Yes! Congratulations, Greg Allen!

For those not familiar with the reference image(s), Richard Prince showed a blown-up Marlboro man image as his own artwork. When Slate reviewed MoMA's Into the West show, Prince denied permission to use the image. Prince appropriated the image from a Marlboro ad but was not allowing his credited artwork to be used.

So, Greg repurposed the Prince piece by resizing it again. Now, it is multiple generations of reuse. Now, Greg had a low-res reuse of the Prince piece that reused the Marlboro ad. And offered that to Slate to use in the article.

Those of you within or familiar with the art world will recognize immediately what the image and initial concept are; so did I. What surprised me is the ensuing discussion and most of all, the process of trying to realize an object that could justify its own existence.

And I hope you'll understand when I say I have no claim on the image, or the idea, or the technical skill of making them, and yet I feel incredibly proud of these prints. They look really nice in person, and especially in various sizes, which is one of the ideal features of 20x200's approach. It's been a lot of fun figuring this project out, and working with the folks there.