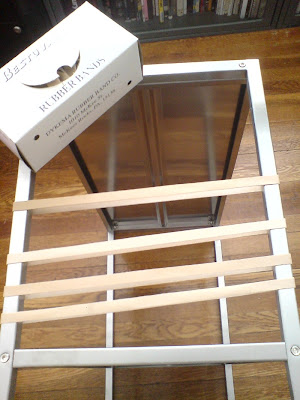 I'm sitting here for a week, wondering how it's possible that I've dodged every entertaining and/or enlightening &c. object. Then I realize I just bought a pound of giant rubber bands from the oldest rubber band company in America, Dykema Rubber Band.

They have a million and one uses, I'm sure, but I needed bookends for an unexpectedly well-crafted steel shelf I purchased on a whim at Ikea. The Dacke shelving unit is Jon Karlsson's pared down interpretation of industrial/commercial shelving, and unusually sturdy and fine. It'd be a fair price at $299, but much more resistible than $74. I bought as many as could fit through my sunroof, so as not to end up with mismatched shelving, because I suspect they are not long for this Swedish retailer's world.

Anyway, Tunis J. Dykema, the well-named founder of Dykema Rubber Band and the grandfather of the current owners, apparently invented the eye dropper in 1931, 1932, or 1935.
Posted by Greg Allen at 7:22 PM
Email ThisBlogThis!Share to TwitterShare to FacebookShare to Pinterest
Newer Post Older Post Home