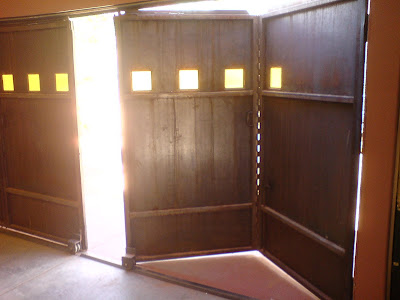 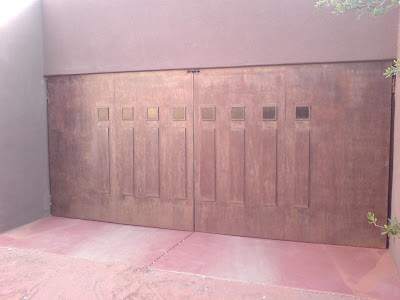 So we're at my in-laws' house in the desert of southern Utah, and they have these rather unwieldy steel garage doors. To open them requires moving out the anti-snake boards, pulling up the steel rod there, then folding them out one at a time as they slide along the track there. 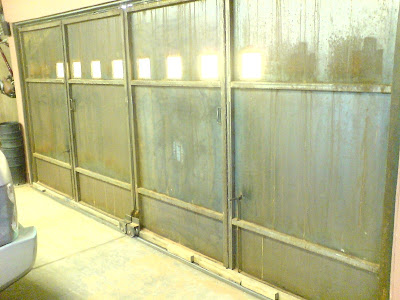 They said an engineer told'em he'd have to sit and stare at those doors for a couple of weeks to figure out how to put an automatic garage door opener on there. There's room for an apparatus or two, but probably not arms. Maybe a chain and winch setup of some kind? If anyone has any ideas, I'd love to hear them.

Update: thanks for the suggestions and questions. A couple of folks asked what the doors look like open, or partly open, so I took another shot:

After telling my father-in-law that the Internet would solve his garage door opener challenge, he mentioned that the real trick--which I'd not noticed--is handling the final pop or lock, like a knee, when the door is shut. Mister Jalopy suggested perhaps an electromagnet, which might, I thought, be able to reverse and push the door out, too.

But his wisest comment was, "this is my favorite type of problem: not mine." And now that we're home, it's not mine, either!
Posted by Greg Allen at 8:27 PM
Email ThisBlogThis!Share to TwitterShare to FacebookShare to Pinterest
Newer Post Older Post Home