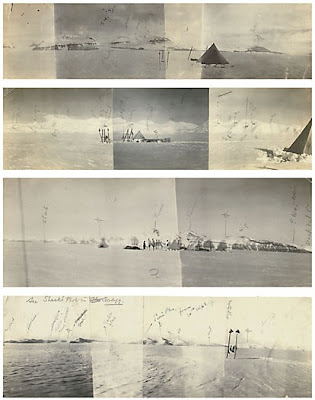 Robert Scott led a British expedition to the South Pole in 1910. Charles Seymour [Silas] Wright went along as a physicist/geologist/whatever, and was turned back when Scott and a couple of others decided to make the last leg of the trip alone. Scott, of course, reached the Pole, only to find out Roald Amundsen had gotten there a few weeks ahead of him. The British crew died on the way back. Silas Wright led the search expedition in 1912 and found his friends' bodies frozen in their tent.

Wright's family has now put his incredible trove of artifacts from the trip up at auction at Christie's London, Sept. 22. For some reason, the photographs blow my mind. There are hundreds of them, vintage prints, contact prints, lantern slides. But just the idea that these guys were hauling glass plate negatives across glaciers and developing them in darktents. 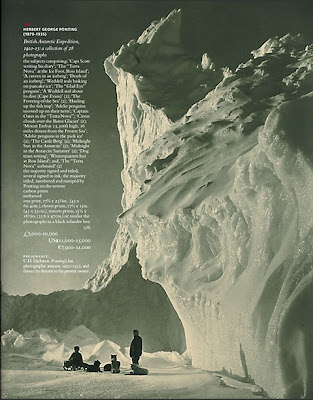 Wright wasn't the official photographer on what was called the Terra Nova Expedition; that'd be Herbert George Ponting, who taught Wright the ropes. There are a bunch of Ponting artifacts and photos in the sale, too, including his own 3-volume set of 800+ prints, which he used for documentation, quality checking, and ordering throughout his life. 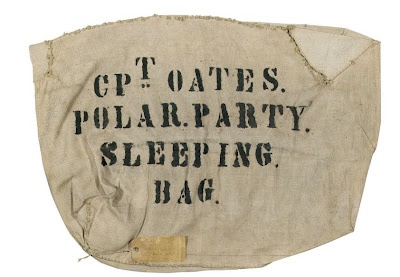 Then, wow, there's Lawrence Oates' sleeping bag cover. Oates was one of the four men who went on with Scott to the Pole:

With 400 miles (670 km) still to travel across the Ross Ice Shelf, the party's prospects steadily worsened as, with deteriorating weather, frostbite, snow blindness, hunger and exhaustion, they struggled northward. On 16 March, Oates, whose condition was aggravated by an old war-wound to the extent that he was barely able to walk, voluntarily left the tent and walked to his death. Scott wrote that Oates' last words were, "I am just going outside and may be some time."

Wright and his later expedition returned Oates' things to his mother. It was originally sold at Christie's with other of Oates' effects in 1991. It is expected to bring 25,000-35,000 pounds.

I was planning to point out how awful and hard-to-use Christie's new ecatalogue system is, but at this juncture in the blogging process, my complaints seem a bit petty.