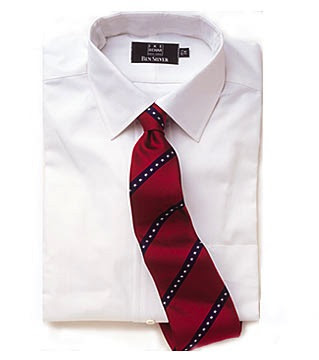 Growing up in North Carolina, I knew we didn't celebrate Lincoln's birthday in school, and my first and second madras jackets were from the Charleston, SC haberdasher Ben Silver. But I largely left the South before reaching the age where I might have heard of the Anglo-Confederate Society regimental stripe tie.

According to the Ben Silver website, "During the War Between the States, British MPs wore a similar cravat in Parliament to express their sympathy for the Southern Cause." Though there is not a single mention of an Anglo-Confederate Society that doesn't involve Ben Silver ties--and the occasional political controversies involving them, from Virginia Democratic senator Chuck Robb in 1994 to Glenn Beck in 2010--this might be somewhat true. Or at least truthy.

Though if there were an historical basis for it, one might think noted WBtS historian John D. Bennett might have made a single mention of such cravat-wearing solidarity among the so-called "Southern Lobby" in Parliament in his 2008 book, The London Confederates.

There is the story of Capt. Lewis Guy Phillips of H.M. Grenadier Guards Regiment giving his regimental colors to Major John Pelham of Alabama to wear into battle, but that's Alabama, and anyway, the Grenadiers' colors are a simple red and blue stripe.

So I have to think this Anglo-whatever is just Ben Silver's genteel triangulation to provision his troops with Confederate regalia that's plausibly deniable enough to wear outside the country club. Unlike the gold-plated brass blazer buttons featuring the Great Seal of the Confederacy which, well, just are what they are.