The Final Curtain By John Dogg 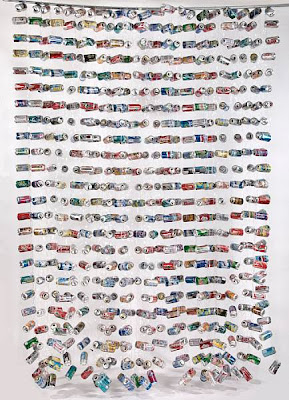 In 2007 in his Guggenheim retrospective catalogue, Richard Prince finally 'fessed up to being the artist behind the fictitious artist John Dogg. Dogg had begun showing in the 1980s at American Fine Arts, the gallery run by his co-creator, Colin de Land, who passed away in 2003.

I guess Dogg poured a few out for de Land since then, because in 2005, he showed The Final Curtain, a hippie-meets-trailer trash doorway bead curtain made from empties and plastic six-pack rings.

It was in Neville's bad boy summer show at Gladstone, where the Rubells bought it, and then holy smokes, they just sold it at Bonham's? Were they trying to be sly or something? How odd.

And what an odd, contradictory, incomplete listing. No mention of a certificate? The variable dimensions? Maybe it was an edition, and the Rubells didn't even sell theirs? Their installation shot does seem to have fewer cans. Are the cans archival? Did John Dogg really drink that much Vanilla Coke? So many questions.