I'm Sorry, A WHAT In The Shape Of A WHAT? 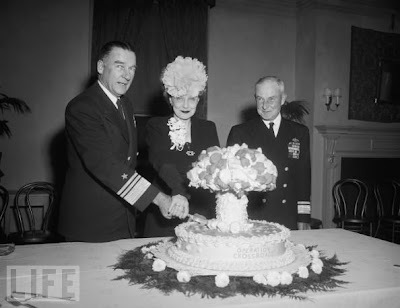 "Atomic Cake
From left: U.S. Navy Vice Admiral William H. P. Blandy, his wife, and Rear Admiral Frank J. Lowry cut a cake made in the shape of a mushroom cloud at a reception for Operation Crossroads, November 6, 1946."

The cake was ordered by a member of Admiral Blandy's staff from a bakery in East St. Louis, Illinois. Eugene Kuehn and "a bakery supply salesman named L.Y. Stephens" designed it using "angel food puffs," and arranged for it to be shipped to Washington by car.

It's on LIFE's site now, but this image was actually first published in the Washington Post, on the Society page, where it was led above-the-fold coverage of the reception.

The photo so outraged Reverend Arthur Powell Davies, of Washington's All Souls Church, that he condemned it in a fiery sermon, which in turn set off an international media furor.

Bill Geerhart has an engrossing writeup of The Atomic Cake Controversy of 1946 on his Cold War blog, Conelrad Adjacent.