McDonald's Pies Of The World And Asia 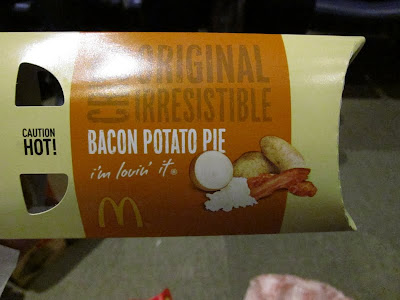 Time was when you could leave the US of A and be pretty confident that, no matter where you landed, McDonald's would have the old school, bubbly fried apple pies waiting for you. [Once, in London near the holidays, I found a mincemeat pie, with raisins and spices and a dollop of some custard-like stuff inside. It remains the only mincemeat anything I've ever eaten.]

But this is no longer the case. Both France and the Netherlands have killed the classic pie and replaced it with plexiglass case of baked goods. Germany's still fine. And Asia, most of Asia still has the OG pies. [Bonus: on a business school trip in 1994, I visited the McDonald's pie factory outside Shanghai. It was being run by a young lady from the Oklahoma family who'd been McD's sole piemakers for decades. Their first operation outside the US. I may be remembering the details a bit wrong, but I'm directionally correct. update: Whoops, it was Beijing, but yes, the Bama Pie Corporation.]

Anyway, flash forward to Tokyo, where my hero Andy of Reference Library, knowing of my thing for McDonald's pies, snapped a photo of a Bacon Potato Pie.

Which, well, thank you, Andy, but it appears to be old news to the nomads walking the earth, seeking out oddball McDonald's pie variations: chocolate orange, taro, corn?