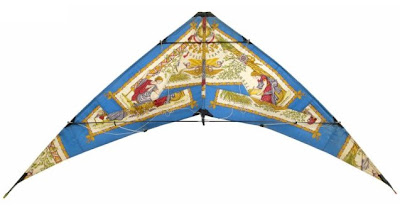 For the French Bicentennial, Hermès created a commemorative kite from a silk scarf. I mean, wow, they actually cut and pieced it together.

When I was young and stupid, I once had an idea to use a bunch of Hermès scarves to line some pointless piece of clothing, like a duffle coat or something, but I snapped out of it. As cool as this is, and even though it was done in-house, I'm still not quite sure of the karmic implications of using Hermès scarves as raw material.