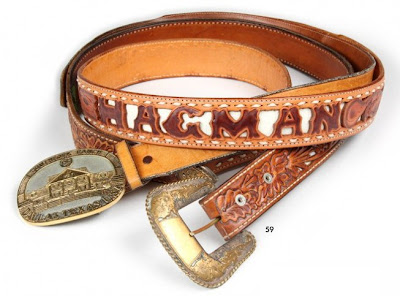 From the New York Times:

"There comes a time, even in J. R. Ewing’s life," he said, "when you have to downsize." Besides, he added, even with 413 items on the auction block, "I have more left at home than I know what to do with."

The "he" in that paragraph, of course, is not J.R. Ewing, a nominally fictional character, but Larry Hagman, the very real actor who portrayed him on television.

As the "Dallas" theme song trumpeted, Charlene Tilton, the actress who played J. R.’s ne’er-do-well niece Lucy, stood nearby and lamented her lack of forethought about collectibility. "I didn’t save a damn thing," she said.

Did you know Hagman's mother was Mary Martin, from South Pacific and the Broadway version of Peter Pan? I did not.

I suppose growing up in show business can educate a person about the vagaries of fame as well as its value. Which can sometimes be measured exactly by the premium over craigslist your random furniture and biker jackets will bring at auction. 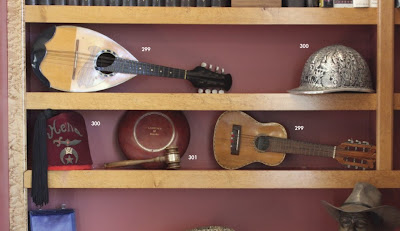 "Lawrence of Malibu" embossed leather Frisbee, plus
ceremonial gavel for Larry Hagman's day as Honorary Mayor of Malibu
or whatever in 1986. Also a decorated metal hardhat

And I imagine it helps to foster a certain kind of narcissism, of the sort that prompts you to monogram all your buckskin. And to commission multiple pastel portraits of yourself wearing a cowboy hat. And to refer to yourself as the character you played thirty years ago. 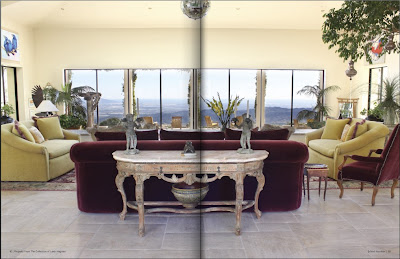 Living room at "Heaven," The Hagman estate in Ojai, I think

The disco ball is not included in the sale, but check with the realtor to see if it conveys.