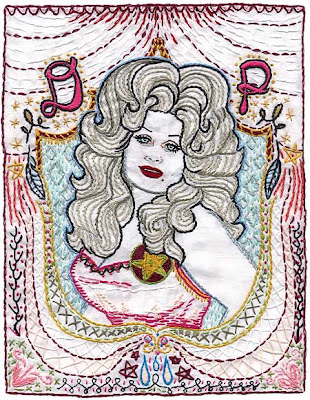 At Maker Faire Austin, Mark Frauenfelder and I were lucky enough to see Jenny Hart's presentation on her art, her techniques and her adorable little company, Sublime Stitching. It was a standout presentation as Jenny let the audience behind the curtain to explain her process of making art. When an artist generously shares the magic, it really feels like Houdini's tricks are being unraveled and it is exciting to catch those sparks of creativity. Half way through her talk, Mark said, wide eyed, "It makes me want one!"

Though her works could stand as illustration, the embroidery brings a bittersweet sentimentality that is completely and strikingly personal. Sentiment can be cloying but this isn't empty nostalgia for a revived craft of samplers and pillowcases. These are intimate brush strokes that feel so close to the artist and make Dolly's tears a melancholy shared. How I do want to touch those stitches!

Jenny Hart's work has changed how I think and I am excited to see what inspires her. Please welcome Jenny Hart as D+R's newest guest blogger.

...the first design company to bring tattoos and rock-and-roll to embroidery design. Good-bye bunnies, teddy bears and geese in bonnets! Since 2001, Sublime Stitching has inspired thousands to try their hand at embroidery and remains the leading innovator for alternative embroidery Patterns, Kits, Tools, Textiles and Education for this once-dying hobby. Sublime Stitching is the original independent company that fired up the needlework revolution for the DIY movement and remains the driving force enticing anyone and everyone to try embroidery.

Who are you? Who creates all this stuff?

Jenny Hart founded Sublime Stitching in 2001 to bring back embroidery! Frustrated at the overabundance of tepid, cutesy needlework patterns and boring, stiff instructions that offered little encouragement to a new generation of stitchers, Jenny decided to start a design company of her own with a new take on stitching. The first line of designs launched in 2001 under the company name Sublime Stitching® to worldwide press and exclamation over her mix of art and craft. 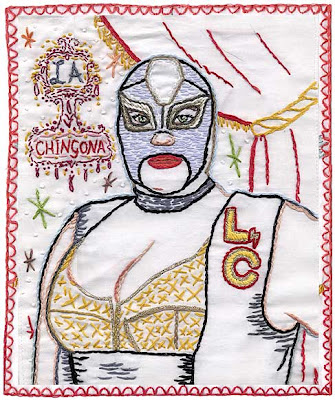